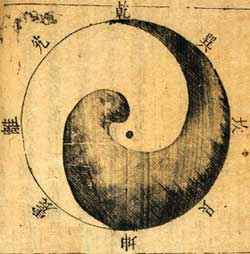 The Ancient Chinese were scientists of the natural world. They studied the relationships and patterns that they observed in the world around them. Their understanding of the Earth was that it is a harmonious system. In their eyes, no single being or form could exist unless it was seen in relation to its surrounding environment. Ying yang theory grew out of a simplified form of this understanding so they could try to explain complicated process in the universe.

The yin yang principle is a sort of logic, that looks at things in a perspective with regards to the whole. The concept is one of polarity, it is based on two fundamental constituents: yin and yang, which are neither materials nor energy. They merge in a complementary fashion and create an approach for describing interactions among things. Progressively, this concept grew into a system of thought that was applied to other areas. Traditional Chinese Medicine (TCM) is an example of one area where the yin yang theory is used to understand complicated relationships in the body.

The original concept of yin and yang came from the observation of nature and the environment. “Yin” originally referred to the shady side of a slope while “yang” referred to the sunny side. Later, this thinking was used in understanding other things, which occurred in pairs and had complementary and opposing characteristics in nature. Some examples include: sky and earth, day and night, water and fire, active and passive, male and female and so on. Working with these ideas, ancient people recognised nearly all things could have yin and yang properties. Yin and yang can describe two relative aspects of the same phenomena such as the example of the slope, or they can describe two different objects like sky and earth.

Usually, yang is associated with functional aspect of an object and has more energetic qualities, for example, moving, ascending, expanding, heat, bright, progressing, active and hyper-functioning states. Yin, on the other hand, is associated with the physical form of an object and has less energetic qualities such as stillness, descending, contracting, cold, dark, degenerating, latent and under-functioning states.